Home At Home Amazing Rubs and Marinades for Your Pork Chops 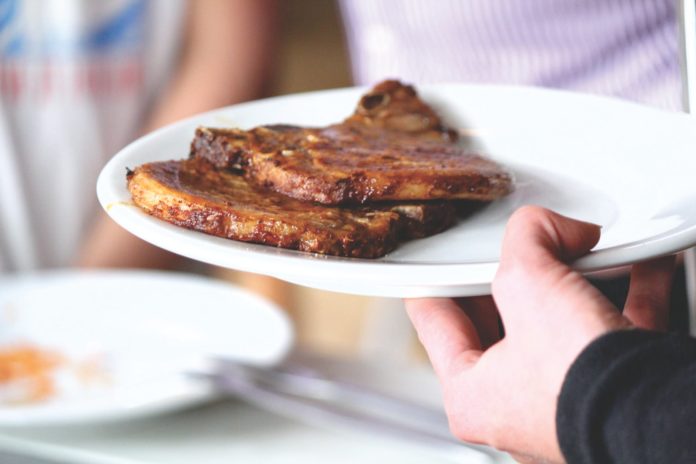 Pork chops are the most expensive parts derived from the loins of pigs. There are four important sections from which pork chops are cut from and according to those sections, there are four types of chops. Shoulder chops, loin chops, rib chops and sirloin chops are all similarly priced more or less, but making them worth the taste is the hard part. The right amount of tenderness and flavor could be quite difficult to attain, because each of these sections have varied levels of fat and juice.

How To Make The Perfect Pork Chop Marinades

Pork chops can be grilled, baked, pan fried and even cooked in a pressure cooker! You could use the same marinade in each case, but the temperature conditions and duration of cooking time would vary. Here are a few simple combinations that you can follow to create pork chop marinades that could give your meat the taste you’ve been hoping for:

If you want a sort of sour flavor in your pork chops you can try to do this marinade. Get rid of most of the pork fat and season the meat with 0.5 teaspoon cumin, 0.5 teaspoon chili powder, 0.5 teaspoon paprika and squeeze some lime juice along with zest from a lime. Also add 1 teaspoon of kosher salt and a little bit pepper, then allow the meat to sit in the marinade for at least 20 minutes before grilling.

Take a large bowl and place the pork chops into the bowl. Add 0.5 cups of soy sauce, 0.25 cups brown sugar, 0.25 cups of dry sherry, 1 teaspoon garlic minced, 0.5 teaspoons of Lawry’s seasoned salt and 0.5 teaspoons of salt. Also add slices of two green onions. Ensure that both sides of the pork chops are covered properly with the marinade mixture and place the meat in a plastic bag that is re-sealable. Allow the meat to sit for an hour and then prepare for grilling. If you’re going to grill tomorrow, you can keep the meat marinade for 24 hours maximum in the fridge. This marinade will allow you to taste southern flavors like never before.

The reason I mentioned the timings for refrigerating marinade meat mixture is because many people are quite concerned about this. Remember that 6 hours is the minimum amount of time that you can refrigerate your marinade, whichever type it is. You can keep it in for a maximum 24 hours.

Baking pork chops: If you don’t want to grill or fry, you can opt for oven pork chops. In fact, baking pork chops is pretty easy and quick. All you have to do is preheat the oven to 350 degrees F and bake on a sheet pan for half an hour. If you see that they’re still uncooked inside, you can bake for 5 more minutes. Once it’s done, allow the pork chops to rest, with a piece of foil over the top for a few minutes.

Grilling pork chops: Grilling pork chops on a good gas smoker is definitely the more popular choice and there’s good reason for that. Who doesn’t want to taste the deliciously tender and juicy meat. You should grill for upto 8 minutes on the first side and around 3 minutes for the other side. If meat looks cooked through properly, allow the meat to be covered with foil and keep it in rest.

Marinade is used to give the meat a flavorful juicy appearance and takes quite some time to settle. If you want to grill or bake as soon as possible, rub is the real deal. No matter what process you use to cook pork chops, the rub you will use determines the ultimate taste! You could use one of the two methods of making rub that I have shared down below.

Take a small bowl and mix 2 tbsp olive oil, 1 tbsp chili powder, 1 tsp paprika, 1 tsp minced garlic, 1 tsp salt, 0.5 tsp dried crumbled oregano, 0.25 tsp ground cumin and 0.25 tsp ground black pepper. Cover the pork chops with the rub mixture and allow refrigeration for around 15 minutes. You can heat the broiler and broil those pork chops for 5 minutes, on both sides each. When it has browned well enough you could stop broiling. You can bake pork chops with this rub as well, at 375 degrees F, for around half an hour. Then serve with lime drops!

Whether you grill or bake pork chops, the key to the taste would be having creating a perfect mix of marinade or rub. Rub is usually used when you want to grill really quickly, while marinade is used if you grill after long hours. Very rarely, both rub and marinade are used, but the process could become messy and overall flavor could become way too much. So it’s best to avoid rub when using marinade and vice versa. You can use marinade or rub depending on the recipe and process you have selected to cook pork chops. Pork chops are quite tender compared to steak, so be careful when you prepare the meat.

Which Kind Of Roofing System Is Better In Terms Of Roof Lifespan?