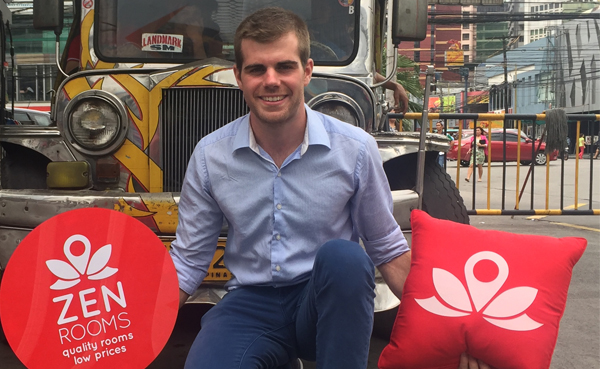 Whenever we hear the position ‘Country Manager,’ what comes first to your mind? Perhaps an image of a person in his early 30s and goes to work in suit, right? But you’ll be surprised that Benjamin Nicolas, the Country Manager of ZEN Rooms, the disruptive budget accommodation company and now the fastest-growing Rocket Internet-backed startup in the Philippines, does not even conform to either of the traditional perceptions of managers.

Because of our excitement to meet Benjamin Nicolas, ZEN Rooms’ Country Manager, World Executives Digest Team arrived minutes earlier than our appointment with him. While we were sipping a cup of tea, I read again his response to my email and the first thing that caught my attention was his age. Ben is 25 years old. Yes, you read it right. The person who holds the highest position in the fastest-growing Rocket Internet backed startup in our country is very young. And when he arrived, we were even more surprised. He wasn’t the typical manager you would imagine.

The face of a new leader: young, humble and steadfast

He wasn’t wearing the formal coat and tie like what we usually would expect. He was wearing a polo shirt, more of a casual look, but you can feel the superb energy from him. The young French national graduated from an elite French business school ESSEC and the top military school French Military Academy of Saint Cyr.

At 25 years old, he had already held key positions prior to his leadership role in ZEN Rooms Philippines in summer 2016. He led Operations for Rocket-backed Kaymu, the leading general e-commerce company in Pakistan, Bangladesh and Sri Lanka. He started his career in Strategy Consulting in Africa where he drafted domestic air transport strategy.

Ben proves that even at a young age you can be given major responsibilities and yes, you can do it. He gives credit to his parents for helping him become a great leader. His parents raised him and her younger sister, who’s currently studying medicine in Paris, with high regards for work. His family are from the French Middle class; his father, who did not go to high school, runs a small electricity business in Paris and her mother works in the French retirement administration.

“My first [job] was in my father’s company as an electric laborer when I was 15 years old. I was in the field on a construction site doing manual work for 2 months during summer. My parents wanted me to understand the difficulty of work, particularly manual work. I really learnt a lot and this experience participated in shaping my hands on mentality and respect for people doing hard repetitive jobs.”

Another thing that we can get inspiration from Ben is how he managed to work in a foreign land. He shared that the key is adapting fast in the community and enduring pressure.

“Being in an unknown foreign country 15,000km away from home, building a performing team, meeting the ambitious targets I receive from my management all represent a lot of challenges that I was more than happy to take!”

Here are other tidbits of inspiration from our laid-back interview with Ben:

Nadj: Aside from being ZEN Rooms PH Country Manager, can you tell us more about yourself?

Ben:  I’m a very active and result oriented person, giving the best of myself in all the fields: studies, work, sports… I love sports and regularly practice Mountaineering, Freediving, Running, Swimming, Wakeboarding, Rock Climbing and Skydiving. Every morning, before going to work I do 1 hour of sports. That’s where I get all my energy from. I also love traveling and have been traveling to more than 60 countries on a budget, often sleeping outside because hotel was too expensive.

Nadj: Are you a boss or a leader?

Nadj: Who is Ben as a leader?

Ben: I’ve always enjoyed taking the leadership in a group, at school, in my friends groups, during my studies. I’m a very hands on person and always take time to master tasks before delegating them. I like to create a good working atmosphere around me and see people around me grow with the company. I’m always encouraging people to give the best in a friendly and comprehensive way and it’s been working so far!

Nadj: What inspired you to choose this career path?

Ben: I wanted to build things and have a visible impact on the field I work in, that’s why I decided to study Business and specialize in Entrepreneurship. My first experiences in other start-ups pushed towards more responsibilities and my background as a backpacker pushed me towards the travel industry!

Nadj: What’s the best part of running a company in the Philippines?

Ben: Running a company here, I can see the impacts of my work on the society. With ZEN Rooms, we are shaping a different hotel industry for the Philippines. Few Filipinos can travel because hotels are very expensive compared to purchasing power. With ZEN Rooms, we are offering something new and enabling people to travel more. Some people already thanked me for this and that’s very rewarding.

As a company leader, I also learn a lot from the people I work with. I see my colleagues growing everyday in what their job and this is giving me a lot of motivation to grow the company bigger and give them more responsibilities.

Nadj: How is managing a hotel business different from other businesses?

Ben: The hotel industry is very complex: it’s a customer oriented business, my most important KPI as a country manager is customer satisfaction: We guarantee a good stay to our guests and we want them to come back. Any bad experience might result in a lost customer. In order to fight it, we are selecting good partners willing to offer the best to their guests and we are making them even better by upgrading their facilities, advising them on management… We also have a very good customer service team available 24/7 to answer customer inquiries.

Nadj: If you weren’t ZEN Rooms Country Manager, what career path could you have chosen?

Ben: If I was not Country Manager at ZEN Rooms, I would apply to this position! I’ve been working in already 3 startups before starting with ZEN Rooms, always getting more responsibilities, the next step for me was to become country manager!

Nadj: Lastly, what are your tips for young leaders and aspiring entrepreneurs?

Indeed, age is just a number and leadership positions can’t just be boxed in any norm. Ben is an inspiration that we, young leaders, can take on key roles and that we can do it if we’re really determined. To see a bigger picture of Ben’s leadership, you may check out https://www.zenrooms.com/ and see how he had developed the business in just less than a year!