Home 1-slider CocoHut: Taking Your Pinoy Favorites to the Next Level 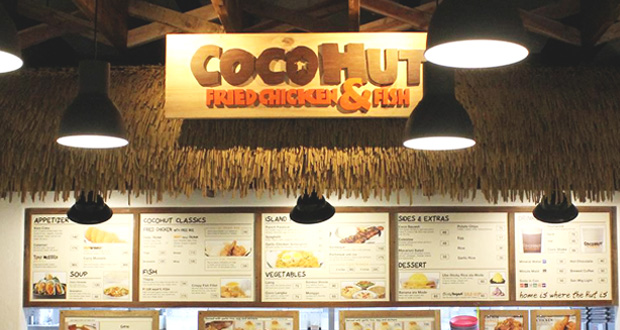 Cocohut sounds like a combination of “bahay kubo“ and coconut, doesn’t it? Well, when you happen to pass by one of its branches, you’ll definitely agree. Upon entering its Jupiter- Makati branch, you’ll be welcomed by the island vibes as seen from the restaurant’s interiors. Cocohut’s interiors include coco lumber and rustic decorations, giving you a laidback feeling as you dine in, as Ms. Maureen Quiambao, Cocohut’s Marketing Manager describes. “It’s like having a quick island vacation as you enjoy the sumptuous meals.”

Cocohut Fried Chicken and Fish is a restaurant serving Filipino favorites, on a next level. Some of its specialties are derived from the resto’s name itself, Cocohut = coconut. Its “coco-fied” dishes are Lechon Coconut Fritters, Coconut Calamares, Buko shake, and Coco Gulaman. On your first or next visit to Cocohut, here are specialties to try:

1. Lechon Kawali- Who would not know Lechon Kawali? It is a portion of crispy fried pork belly served with liver sauce.

2. Lumpiang Shanghai-This is a Filipino-style spring roll filled with ground pork, red onions, garlic, onion leeks, and spices which is fried to a golden brown crisp.

3. Lechon Kawali Kare-Kare-This is one of Cocohut’s best sellers, a fusion of two Filipino favorites. This is the usual kare-kare with thick peanut sauce and vegetables, but the meat consists of deep fried lechon kawali.

5. Tahong Soup-Cocohut’s tahong soup isn’t your usual tahong soup. They use New Zealand mussels which are as twice the size of the mussels found in local markets and then cooked in ginger-based broth.

This restaurant is one of the best alternatives to fast food, especially for lunch-outs with officemates or Sunday gatherings with the family. The restaurant’s dishes gives us and even foreigners access to Filipino food which isn’t in food chains or diners. Pinoys who crave for Filipino food on random days would surely love the meals here because aside from the nipa hut-homey vibes, the food tastes much like home-cooked meals. After all, home is where the hut is.

The Cocohut Jupiter branch is open from 6 AM to 12 MN, where you could dine in or grab meals from breakfast until midnight snack time. Cocohut is also available at Glorietta.