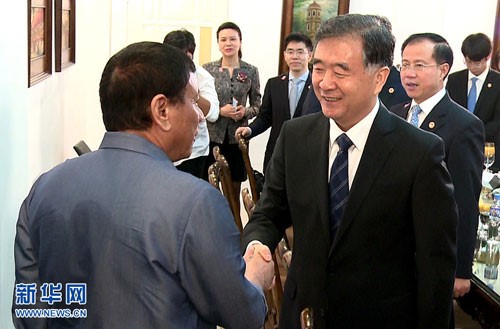 The agreement was signed at the Malacañang of the South in Panacan, Davao City, to reaffirm the stronger bilateral ties, particularly in fields of trade and commerce, as well as the importance of peaceful settlement of disputes of both parties.

In a Business World reportph-china, Presidential Spokesperson Ernesto C. Abella said Wang reiterated China’s commitment to follow through on the agreements made by Duterte and Chinese President Xi Jinping last year. These include the private-public partnership (PPP) and on trade and investments.

Duterte raised concerns on piracy and terrorism in the Asia-Pacific region, while Wang emphasized the need to focus on common interests between the two countries that have contested territories.

The Department of Finance (DOF) also reported that Finance Secretary Carlos Dominguez III and a high-level delegation from China met at the Marco Polo Hotel Davao to discuss the approved Philippine Development Plan and other Philippine economic developments and plans.

On the agenda was the bilateral cooperation on infrastructure, trade, agriculture, investments, tourism, fishery and the financing corporation.

In terms of infrastructure, the governments of the Philippines and China exchanged letters to formalize the agreement on the conduct of preliminary feasibility studies for the proposed Davao City Expressway and the Panay-Guimaras-Negros Island Bridges projects. They are included in the nine Private-Public Partnership (PPP) projects agreed upon during Mr. Duterte’s trip to China, and will be funded by Chinese concessional loans and grants.

“In the high-level meeting with Chinese officials led by Wang, Dominguez thanked China for its grant of assistance worth $91 million, which include a $1-million donation for the earthquake-hit Surigao; a $75-million grant for the construction of the Binondo-Intramuros and the Estrella-Pantaleon bridges across the Pasig river; and the ongoing $15-million financing provided under the anti-illegal drugs and law enforcement security cooperation agreement signed last year between the two countries during President Duterte’s October state visit to China,” the DOF disclosed in an Inquirer report.

What to Look For When Hiring a Marketing Agency