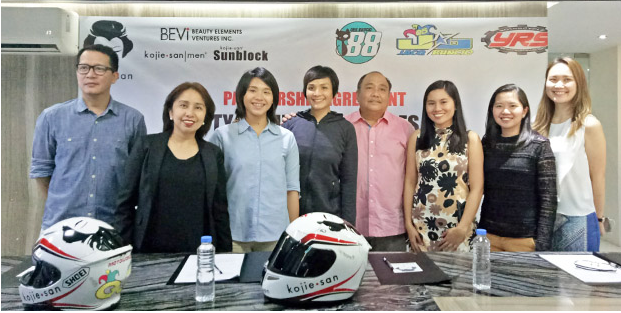 If there are persons who need to take care of their skin delicately, that would be women drivers. That’s why Kojie.San continues to make sure that they are well taken care of — starting with the Buncio Sisters.

These two brave and daring girls are the siblings of Maico Greg Buncio, the 2011 Golden Wheel Awards’ Driver of the Year, and a four-time Philippine national superbike champion. As athletes who are into a male-dominated sport such as motorcycle racing, Kojie.San sees them as bearers of women empowerment, an advocacy which their brand celebrate and carries along, too.

It was last year when the Buncio sisters initially signed up with Kojie.San for their sponsorship as women riders and motorcycle racing enthusiasts. With Jacq Buncio being able to finish the Philippine Superbike Championship-Pirelli Cup first and Des Buncio racing for the Lightweight Class, it goes to show that this tandem surely embodies the courage and strength that not every woman could exemplify.

Kojie.San, a brand we all know as a skin and beauty care specialist, is established as a homegrown name with products for women. On choosing the Buncio sisters, Ms. Sheena Labor, Brand Manager of Kojie.San Sunblock implies a point on this partnership. “What we aim for is to empower more Filipino women in a field mostly dominated by men,” says Ms. Sheena. Though motorbike racing isn’t that as famous as basketball or volleyball in the Philippines, together with Kojie.san, they could raise awareness on how women could also do what men do, or even surpass their works. They too also represent the millennials today who are bound to be brave and limitless, like the Buncio sisters.

In the same way, not only the Buncio sisters or women could be related to Kojie.San because they’ve got Kojie.San Men too, which protects and empowers men on outdoor activities such as motorbike racing.

The contract signing was held at the 4/F, Conference room of Beauty Elements Ventures Inc. in Makati City.