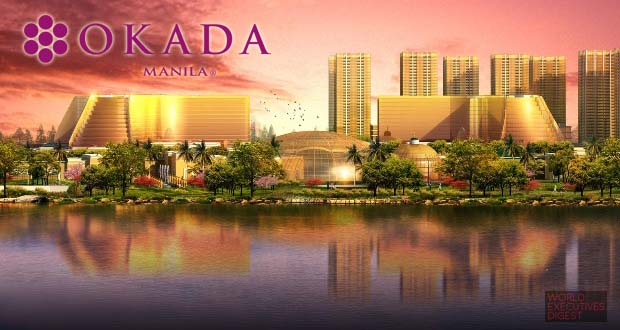 Okada Manila, the latest casino resort and hotel complex to be added in Manila Bay’s Entertainment City, will finally open its doors this February after several months of delay.

The integrated casino resort held its preview event last December 21 with a Christmas concert featuring top Filipino artists Lani Misalucha, Regine Velasquez and Bamboo, as well as a spectacular firework display accompanied by a laser light show. The event was followed by a “soft opening” of a small section of its gaming floor a week later on December 30. Both events were meant to avoid having to pay the regulator a P100-million penalty for missing a year-end opening deadline.

The development will showcase a dancing fountain on a par with that of the Dubai Fountain and Las Vegas’ Fountains of Bellagio, Asia’s first nightclub and indoor beach club enclosed in a dome, a world-class 3,000-square meter spa facility, a high-end retail area and several food and beverage outlets.

In terms of quality service, Okada Manila will combine the Japanese people’s respectful demeanor, passion for creativity and hunger for innovation with the Filipinos’ hard work, hospitality and cheerful spirit.

Steve Wolstenholme, President of Okada Manila, believes in the entertainment resort’s potential to compete with the gaming giants.