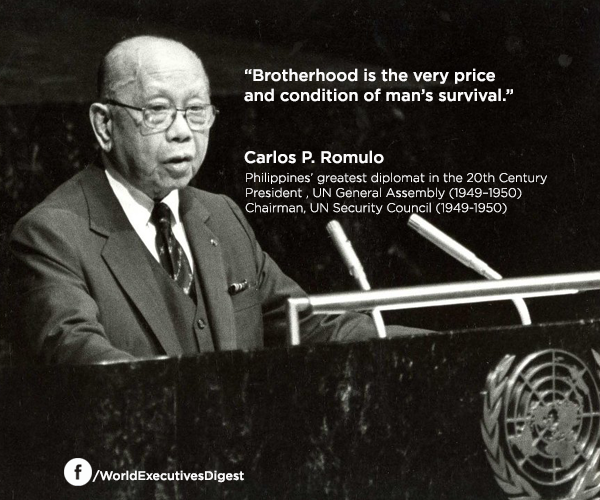 The United Nations was founded today: October 24, 1945, at Lake Success, New York, United States.
We honor the Philippines’ greatest diplomat of the 20th century, CARLOS P. ROMULO, who was one of the signatories to the UN Charter.
—
Famous anecdotes of Sec. Romulo:

At the third UN General Assembly, held in Paris in 1948, the USSR’s deputy foreign minister, Andrei Vishinsky, sneered at Rómulo and challenged his credentials: “You are just a little man from a little country.” “It is the duty of the little Davids of this world,” cried Rómulo, “to fling the pebbles of truth in the eyes of the blustering Goliaths and force them to behave!”

During his meeting with Josip Broz Tito of Yugoslavia, Marshal Tito welcomed Gen. Romulo with drinks and cigars, to which the general kindly refused. Their conversation went as follows:

At this, Marshal Tito was tickled by his reply and loudly exclaimed around the room, “I etcetera, etcetera, etcetera!”
—
Like this quote? Like our page, too!
Facebook.com/WorldExecutivesDigest
Curated and condensed learnings
for busy executives
The World Executives Digest is a social blog published by Homerun Nievera (http://homernievera.com/).