Home Quotable Tips Talent is the No. 1 priority for a CEO 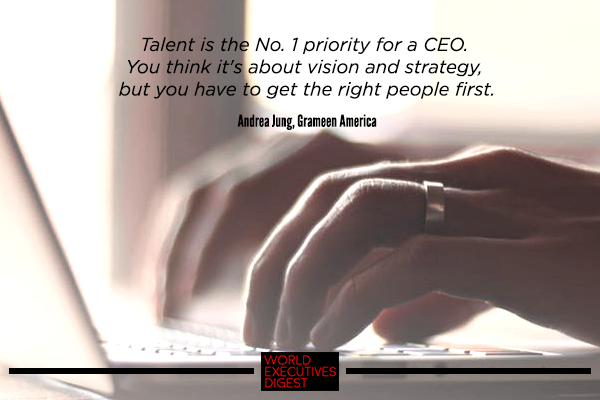 “Talent is the No. 1 priority for a CEO. You think it’s about vision and strategy, but you have to get the right people first.”
– Andrea Jung, Grameen America
Whatever goals and directions a company will have, people make them happen. Find great talent, make your company great.

Jung is a Canadian-American executive, non-profit leader, and prominent women’s-issues supporter. In April, 2014, she became President and CEO of Grameen America, a nonprofit microfinance organization founded by Nobel Peace Prize winner, Muhammad Yunus. Grameen is the fastest-growing microfinance organization in the United States, providing the largest number of microfinance loans to individuals and small businesses. From 1999 until 2012, she served as the first female CEO and Chairwoman of Avon Products, Inc., a multi-level marketing company. Jung was also the first woman to serve as Chairman of the Cosmetic, Toiletry & Fragrance Association, and Chairman of the World Federation of Direct Selling Associations. (Source: Wikipedia)