Home Quotable Tips The future belongs to those who believe in the beauty of their... 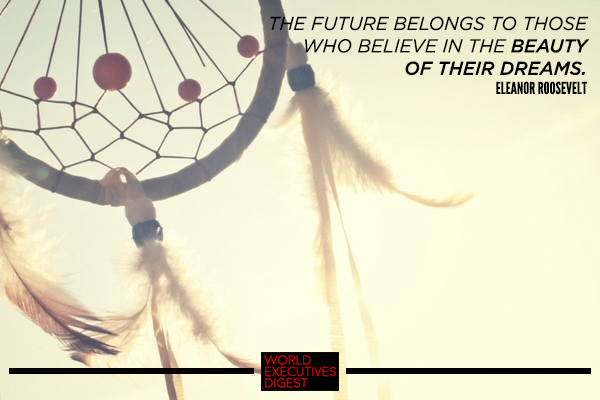 WorldExecutivesDigest.com | “The future belongs to those who believe in the beauty of their dreams.” – Eleanor Roosevelt | What you believe, you become. This is my motto. This is what drives me everyday, which is to believe in my dreams. As a positivist, I know that the future I will create is dependent on the type of dreams I have for myself and for the betterment of this world. So when I dream, I dream big. Then, with hardwork, patience and a lot of prayers, I make it happen.

Anna Eleanor Roosevelt (October 11, 1884 – November 7, 1962) was an American politician, diplomat, and activist. She was the longest-serving First Lady of the United States, having held the post from March 1933 to April 1945 during her husband President Franklin D. Roosevelt’s four terms in office, and served as United States Delegate to the United Nations General Assembly from 1945 to 1952. President Harry S. Truman later called her the “First Lady of the World” in tribute to her human rights achievements.

—
Like this quote? Like our page, too!
Facebook.com/WorldExecutivesDigest
Curated and condensed learnings
for busy executives
The World Executives Digest is a social blog published by Homerun Nievera (http://homernievera.com/).