Home Quotable Tips The only way to do great work is to love what you... 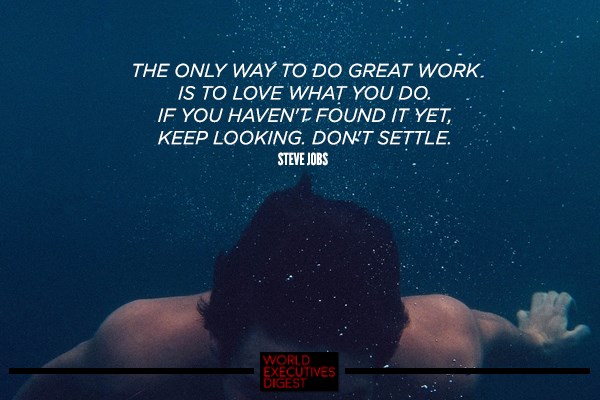 “The only way to do great work is to love what you do. If you haven’t found it yet, keep looking. Don’t settle.” – Steve Jobs

Work is never work when you love what you’re doing — with passion. Many successful people have said that their secret to success was not to deal with their failure but to focus on the prize ahead.

Steven Paul “Steve” Jobs (February 24, 1955 – October 5, 2011) was an American information technology entrepreneur and inventor. He was the co-founder, chairman, and chief executive officer (CEO) of Apple Inc.; CEO and majority shareholder of Pixar Animation Studios; a member of The Walt Disney Company’s board of directors following its acquisition of Pixar; and founder, chairman, and CEO of NeXT Inc. Jobs is widely recognized as a pioneer of the microcomputer revolution of the 1970s and 1980s, along with Apple co-founder Steve Wozniak. Shortly after his death, Jobs’s official biographer, Walter Isaacson, described him as a “creative entrepreneur whose passion for perfection and ferocious drive revolutionized six industries: personal computers, animated movies, music, phones, tablet computing, and digital publishing.” – Wikipedia

—
Like this quote? Like our page, too!
Facebook.com/WorldExecutivesDigest
Curated and condensed learnings
for busy executives
The World Executives Digest is a social blog published by Homerun Nievera.