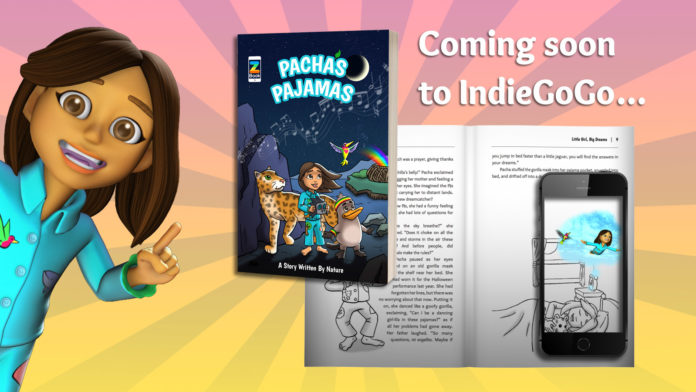 An augmented reality children’s book serves as the bridge between traditional learning through books and the modern way through gadgets and technology. In simpler terms, it’s the infusion of augmented reality into books to make reading and learning more entertaining and engaging.

With the continuous development of technology, an augmented reality children’s book certainly is an innovative product that both teachers and parents can use to educate kids on environmental awareness. As a kind of technology that makes learning interactive, this is one good way to let kids engage as they flip through the pages of a book. The combination of technology and a physical book makes it a convenient educational tool because knowing kids to become attached to using gadgets at an early age, they sure would enjoy using a smartphone or tablet as they read.

Augmented reality, a technology used in children’s books such as Pacha’s Pajamas, provides an enhanced interaction as computer-generated images are superimposed on the user’s view. When used in a book, images may turn into animation or videos which can really entertain kids as they go through the story. Thus, making use of an augmented reality children’s book makes environmental awareness an easy topic to teach, especially to kids who cannot fully understand this concept.

Environmental awareness is known as a complex topic, including concepts such as natural occurrences, climate change, global warming and the like. To kids who are yet to learn these in their secondary or primary education, it won’t be easy to explain these to them at an early age, though it is important to do so. Using an augmented reality children’s book, kids can understand this through a nature-themed storyline with a character that they can surely imagine being friends with. Pacha’s Pajamas, an augmented reality children’s book, teaches kids to become active in helping save the Earth through their own abilities and skills. Pacha’s Pajamas stars Pacha, a little girl wearing pajamas which magically takes her to adventures with the animals and plants printed on the PJs.

Pacha’s Pajamas is the kind of augmented reality children’s book which teaches kids that we are all connected to each other and with nature, so we should all do our part in saving it in our own little ways. This is the kind of learning that isn’t too forced because entertainment is part of the reading experience. Through the Pacha Alive app, you’d have to hover the phone or gadget over the images in the book to make them dance or move.

Not only would the kids learn how to read and learn about the environment, but it would also encourage engagement as augmented reality is associated with a book. So, for teachers, instructors, parents, and guardians, how about exploring on an augmented reality children’s book for your next bedtime story?