Home Quotable Tips When nothing is sure, everything is possible 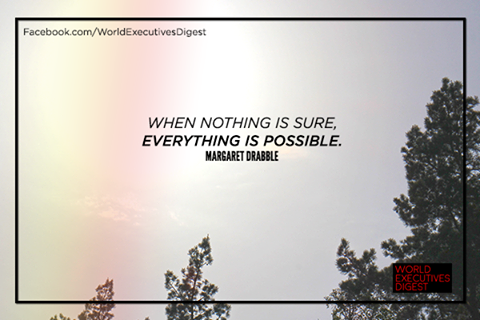 “When nothing is sure, everything is possible.” – Margaret Drabble

Many think that when the situation is unsure, you should be cautious. This way of thinking paralyzes you to act decisively and take risks. Success is usually the result of taking risks without thinking of failure.

Action Plan: Want to succeed more than the others? Think of all the possibilities rather the impossibilities.

Dame Margaret Drabble is an English writer of novels that are skillfully modulated variations on the theme of a girl’s development toward maturity through her experiences of love, marriage, and motherhood. She wrote novels that include A Summer Bird-Cage (1962), The Millstone (1965), The Radiant Way (1987), A Natural Curiosity (1989), The Gates of Ivory (1991), The Peppered Moth (2000), The Sea Lady (2007) and The Pure Gold Baby (2013). Drabble won the E.M. Forster Award for The Needle’s Eye (1972). She also edited the Oxford Companion to English Literature (1985). Drabble was made a Commander of the British Empire (CBE) in 1980 and advanced to Dame Commander of the British Empire (DBE) in 2008.
—
Like this quote? Like our page, too!
Facebook.com/WorldExecutivesDigest
Curated and condensed learnings
for busy executives
The World Executives Digest is a social business blog published by Homerun Nievera.